We Need To Talk (A Guest Blog by Luke, Sam's Husband)

We need to talk.

Those four words the head consultant said to me last Wednesday will resonate with me for as long as I live; for reasons I can only begin to explain.

Entering our fourth week at the Brompton and the few days running up to the major ward round on Wednesday, Sam had become increasingly unwell. She was requiring a great deal of morphine in a sub-cutaneous (under the skin) syringe pump to manage her chest (rib) pain, which at this stage was so agonising that it had begun to wake her at 4am. In addition Sam was being given a cocktail of intravenous antibiotics in various forms (injections and drips), some as many as four times-a-day, together with anti-sickness medications - the kind used with cancer chemotherapies - and anxiolytics (anti-anxiety) to quell the distress. However in spite of all this, the infection was still not yielding. Sam was overwhelmed with exhaustion from fighting and tired of all the pain and did what her body instructed her to do - and that was to sleep.

The ward round team came to see us first. The team gowned up and came in to see that Sam was on her full-face mask with the non-invasive ventilator in a deep and unresponsive sleep. In addition, her oxygen requirements through the machine were vastly increased (from 4l/min to 10l/min) and she did not look well at all. Seeing all this and having discussed the team's struggle to manage Sam's infection the head consultant, Di Bilton, asked me if there was somewhere private we could talk. My heart sank below my stomach. I was under no illusion what this meant but I still didn't quite believe it. We sat on a brown leather couch in the relative's room. The conversation that ensued was difficult to swallow. Di explained that she hadn't expected Sam to have survived the last major hospitalisation during the summer of last year and this time Sam had deteriorated. She said that there was a fine line between life and death it could go either way for Sam and that the next few days were critical. I was strongly advised to not go to work and in fact not to leave the hospital. The treatment options for Sam at this stage were equally risky; the blood work had suggested the current regime wasn't controlling the infection and continuing may not improve things. However a change of antibiotics would provide a window for the infection to take hold and and make Sam worse. Both scenarios had potentially deadly consequences for Sam. Obviously it was a lot to take on board but I couldn't process the news immediately. It was, however, brought into sharp focus the minute I saw Sam again. The conversation with the consultant had now coloured how I looked at her, seeing Sam as fragile and that she could slip away at any moment. The cliches are absolutely true in these circumstances; my world had literally stopped. The nurses asked if I had got hold of Sam's Mum. I told them I would ring, but I couldn't find the words in my mind to describe the situation. Thankfully they took that responsibility from me and rang Sam's parents so they could come up to be with her. All I could do is sit by Sammy and pace around, unable to decide what to do. The room had somehow concentrated my grief and thoughts of how this might play out dominated my mind. I really wanted Sam to wake up for just a few moments to say something, or anything. I needed that feedback to quell my fears, but all I could do was cry in the bathroom when I became overwhelmed.

Sam's mum, Ros, rushed to the hospital, with Alan (Sam's Dad) and brother Ian waiting at home poised to travel up if the situation became critical. To be honest I was grateful for the company. We could only sit there and spectate as Sam battled her CF as she slept. We prayed that God would spare her life and I found great comfort in Psalm 16. Sam continued to sleep for 2 days, although it felt like weeks. The team kept giving Sam her intravenous drugs and I know that she was fighting valiantly as she slept. We all braced ourselves for the worst. we wondered if Sam would ever see her 28th birthday later that week. The nursing staff, who are very fond of Sam would periodically pop in to see her, obviously having heard the news. The gravity of the situation weighed heavily on my mind and I was sharply reminded of it when the nursing staff kept offering me cups of tea - this was very kind, of course, but the fact that they continued to asked how I was doing meant that Sam wasn't fairing very well at all.

Despite all of this Sam began to recover. Sam woke up (thank God). At first it was for a few moments to use the bathroom. But then those moments evolved into short periods of time. Sam wasn't very lucid in these periods of wake but that was enough for our hopes to be raised. Day by day Sam became more conscious for longer periods. On Saturday Sam managed to enjoy her birthday. We marked it with a small celebration with the families and decorated her hospital room.

Today, Sam had her first day of full consciousness. She is stable now and we are more hopeful. Clearly, we have a long road ahead of us and we may never leave hospital - unless we get that transplant. Sam is very tough and we take great hope from the knowledge that God has spared her life again. 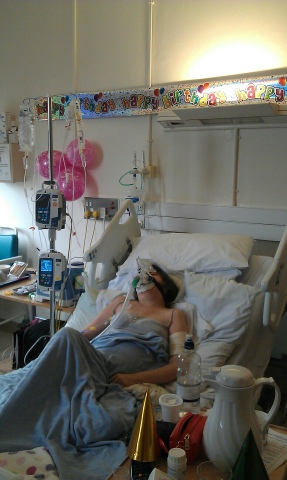