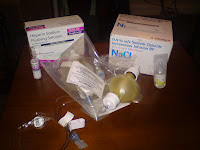 Unfortunately I am now adorned with another tether, which I hope is temporary! After feeling a bit on the ill side for a couple of days, I rang the Brompton Hospital to get some oral antibiotics, as I want to jump on any infection as soon as possible. However, the antibiotics decided not to work and to make me sick instead (thank you very much!), so I had to go to the Royal Brompton Hospital as a day case and start a course of intravenous antibiotics (IVs for short). As I mentioned in my first blog, the sticky mucus in the lungs of CF sufferers is a breeding ground for bacteria. Most CF sufferers are permanently colonised with a type of bacteria, in my case this is Pseudomonas aeruginosa (or to give it it’s full title ‘a pain in the ar*e’). This can never be fully eradicated, but is managed using a regime of inhaled antibiotics. Over the years during infective episodes where the bugs become too much to handle, I am given IVs to kill the uprising infection. Over time it has become resistant to a large number of antibiotics, so only a handful of IVs will manage it. It’s been a fine balance throughout my life to manage the infection in my lungs. On one hand I’ll never be rid of all infection on the other we don’t want the bacteria to grow uncontrollably. It is these episodes of infection which have wrecked my lungs. This is why I need a double lung transplant, not only due to my horrendous lung function but if I only had one lung transplanted, infection would cross from my old lung to the new one. So I need a new full set.

On arrival at the ward I had my observations taken and I blew a lung function test. The hospital generally look at 2 readings; FEV1 which is the amount of air you can force out in 1 second and FVC which is ‘forced vital capacity’ this gives a reading of the total volume of the lungs. The FEV1 is the most indicative of infection so it’s the result most often looked at, although the FVC is useful to know too. My result was abysmal... my FEV1 at the best of times in the last couple of years has been only 18%, so to blow half my average is not a laughing matter!  Fortunately my blood oxygen saturation levels had remained unchanged (93%), so the doctor agreed to let me go and start my IVs at home, obviously with the strict instructions to contact the hospital if I don’t begin to feel better in a couple of days.

The nurse then came along to attach my ‘tether’ through which my IVs will be administered. I have a ‘Portacath’, which is a device situated under my skin at the top of my chest, just below the collar bone. It is, in essence a metal ‘port’ which connects a catheter to a vein. This is the second Portacath, which was implanted surgically many years ago. This is then accessed externally using a needle with a line attached, which dangles on the outside. As I have had so many lines and catheters inserted into the veins in my arms and hands over the years, they have pretty much given up the ghost and kind of collapse or generally kick up a fuss if the docs try to put a line in them. My Portacath makes delivering my IVs a lot easier. There was a lot of pinching and gripping involved finding the Portacath under my skin, which of course is painful. Then comes the ‘inserting of the needle’ bit. It is quite usual for many nurses to have multiple attempts at getting the needle into the target, which is a silicone disc in the face of the device the size of a five pence piece covered by my skin. I have to confess when I was (a lot!) younger I would bite nurses’ hands when they tried to ‘stab’ me. What a horrible child!

I left the hospital with mixed feelings. Firstly I was really exhausted from the battery of tests and anxious as I felt so unwell. I wondered whether I’d made the right decision to come home, should I have opted to stay in hospital? Conversely, I was pleased to be going home! I was also incredibly disappointed, as we were meant to be going on holiday to Cornwall with our good friends James and Ruth in about a week’s time, which we aren’t going to be able to do now. However, I suppose it’s more important to get myself better.

I must take this opportunity to point out that there would be absolutely no chance of me being allowed home if it weren’t for Luke, my Mum and the rest of my family. Being on home IVs is not easy – it requires 3 doses of antibiotics to be drawn up in a sterile environment at regular intervals throughout the day. On top of this, I need to eat an awful lot more to help my body fight the infection. This means eating 3 cooked meals a day. I also need more intense physiotherapy. Needless to point out, I am not really allowed to do too much myself, although once I begin to feel a bit better I’m sure I’ll be pottering around as usual! There’s no way to really describe the immense gratitude I feel for my family. Luke, who has had to extend his PhD by a couple of terms over the years (due to my hospitalisations and so on) and is currently writing his thesis, is such a devoted husband he just does everything without complaining or ever making me feel like a burden. Then there’s Mum, who throughout my life has cared for me so well that I was able to complete school, college and university and qualify as a teacher. Then there’s Ian, my brother who keeps me entertained in a plethora of ways, but most commonly, through multi-player online gaming on the Playstation 3 game ‘Call of Duty’! Dad works so hard to support the family and does so without complaining, he’s a real pillar for the family. Of course I must mention my Gran, who pops in every so often to keep me company and keep my mind from dwelling on the negatives. Although I may not have the team or doctors, nurses, physiotherapists, cooks, cleaners and many, many other staff members that I would at the hospital with the love and support of family and friends I can basically receive the same treatment I would in hospital in the comfort of my own home.

I am so blessed in many ways. I know people reading this will think I’m mad to say this, but there are so many people in my situation who don’t have such an amazing support network and have to spend a large proportion of time in hospital. So, this blog is largely a big shout out to all those lovely people who spend a lot of time looking after me, cheering me up with chats over coffees, animated discussions about weddings and bridesmaid duties, pizza and DVD afternoons, wii and wine nights and people who are just there! I couldn’t do it without you! Again, I’ll leave you with another bible verse. Even when things aren’t looking so great, this verse helps me (many thanks to Fred for bringing this to us in church last week); 2 Corinthians 4 v16-18 ‘Therefore we do not lose heart. Though outwardly we are wasting away, yet inwardly we are renewed day by day. For our light and momentary troubles are achieving for us an eternal glory that far outweighs them all. So we fix our eyes not on what is seen, but what is unseen. For what is seen is temporary, but what is unseen is eternal.’