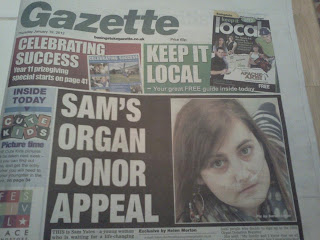 I have been a bit quiet recently and this is mainly been due to the fact that I’ve been a little bit under the weather! I started a new antibiotic nebuliser a few months ago to see if this would help to keep my heath stable whilst I continue to wait for a transplant. In essence, I cycle two different antibiotic nebulisers. I inhale an antibiotic called Tobramycin (Tobi) for one month and then I used to inhale Colomycin for a month and so the cycle continued. However, over time, I began to notice a bit more of a difference between the Tobi and Colomycin months. My doctors suggested that I replace the Colomycin nebuliser for one called Aztreonam (trade name ‘Cayston’). This worked really well for the first two months and my FEV1 lung function even increased from 17% to 20% and my FVC lung function increased from 40% to 46%. I was so pleased and meant that I could really enjoy Christmas! So at the beginning of January I began my second Aztreonam month. The first week went swimmingly – I even felt well enough to go out to the cinema AND for dinner one evening with Luke; something we haven’t managed in a couple of years! However, into the second week I began to feel really terrible every time I inhaled my Aztreonam. I felt really wheezy, breathless and generally felt horrendously lethargic... I could barely wake up before 11 am each morning.

I was obviously really upset by this as firstly, I couldn’t breathe and secondly, after a promising clinic review the drug seemed now not to be agreeing with me. After consulting with my wonderful CF homecare team from the Brompton on the phone we agreed that I should stop Aztreonam for a few days and see if things improve. If they don’t, it means I probably have an underlying chest infection which is causing the irritation and breathlessness. If my symptoms improve, I’m to try the drug again when I feel ‘normal’ again and see if it still has the same effect on me. I’m not really sure what I want to outcome to be. On one hand, I really don’t want to have a chest infection and potentially be hospitalised while they sort me out. Neither do I want the Aztreonam to not agree with me, as there have been so many positive clinical studies about it’s effectiveness, but then again medicine is an incredibly difficult field as one size does not always fit all! After stopping the drug on Tuesday I am beginning to feel better, much less tired and wheezy, but still quite breathless. We have agreed to give it until Monday, so we’ll see what happens... I’m just going to pray that God will take care of the situation!

On a lighter note my local newspaper, the Basingstoke Gazette have run quite a substantial piece about organ donation! I approached them back in October via email about organ donation and asked them if they would consider running an article about it and the editor was very keen and I was even contacted by a reporter on the same day! It was really encouraging to have such a keen response. The Gazette sent a lovely reporter and photographer out to cover the story and it was lovely to discuss the issue with them. We had a good laugh at having to do a photo shoot... Luke particularly enjoyed himself (ha ha!) I’ve decided that I don’t have the discipline to be a model; I couldn’t hold my poses very effectively (mainly without cracking up)!

The piece took some time to come to print as these things often do, but we are really pleased with the end result. Ultimately it’s not about me; it’s about raising awareness about organ donation and the implications of wishing to do so – making that your family/loved ones aware of your wishes.

There are so many misconceptions out there about organ donation and it’s such a shame if somebody decides not to sign up to the register due to being misinformed. Making an informed decision one way or another about deciding to donate your organs after your death is one thing, but choosing not to sign up to the organ donation register because of apathy or being misinformed is something that can hopefully become less common if the whole issue is more readily and accurately discussed.

There are few examples of selfless acts in this world and I believe organ donation is one of them.
Posted by Sammie at 17:59