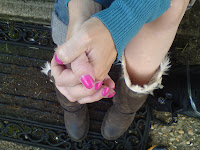 I apologise profusely for my lack of blogging... I usually tend to go quiet when I either ill or busy, I am happy to report that my current quietness is due to the latter and not being ill (well more ill than usual!). It has been a real blessing to be so busy largely due to a number of weddings Luke and I have been invited to. As well as planning and attending the hen-do of a very special friend of mine!  When the hustle and bustle fades however, I am left alone with my thoughts and the one thought that dominates all others is how desperate I am to receive a transplant. I know that I should focus on the fact that I feel generally well at the moment but I do panic and think that it doesn’t take a great deal to make me feel poorly – the slightest cold could potentially go to my chest and worsen my already poor lung function.

Therefore I thought that it would be an exceedingly good idea to get myself up to the Brompton Hospital as a day case and start a course of home intravenous antibiotics (IVs), to keep me feeling as well as I have been feeling and to ensure that I am really really really well for Beth and Ed’s wedding on the 9th June (only 17 days to go!!!). I went up and started my IVs with very little hassle... my lung function was it’s usual low but steady self (Fev1 18%, FVC 45%), weight was a little down, but still acceptable, x-ray unchanged since last time, O2  Saturations were a bit iffy, but eventually decided to climb to 89/90% which they decided was ok (for me!).

After one dose we trundled home and commenced the usual routine of administering the IVs (Ceftazadime 3 times a day and Tobramycin once a day). I felt a bit grotty for the first few days, as they are pretty potent chemicals, I felt a little sick and tired. I had to send a Tobramycin level up to the Brompton before I took my 3rd dose, to check that the drug wasn’t building up in my body and potentially causing damage. Having taken Tobramycin as an IV fairly regularly for longer than 10 years, and always had normal levels this was just another bog standard part of the routine. However, I got a bit of worrying news from the Brompton the day after I sent my Tobramycin level back to the hospital. The level that should be registered before the next dose (at least 18 hours after the previous dose) should be less than 1. However my level was 9, almost 10 times higher than it should be. I had to immediately stop the IV Tobramycin. The Brompton were very concerned as firstly, I am a remote patient, so I’m not at their fingertips to nip a quick blood test down to the lab and secondly they desperately needed to check my renal function as the high levels could indicate kidney damage as this would suggest why the level was so high; it was not being removed from my body efficiently. It was also mean that my other antibiotic would be damaging my kidneys further. Getting a blood test done locally is a very merry dance to lead!! I had to ring up my GP and plead for an emergency test, which they fortunately allowed me to do. Mum (aka Supermum) then had to drive me with the blood sample to the pathology lab in Winchester hospital so it could be tested and then the results communicated back to the Brompton. I am pleased to report that the test on Friday indicated normal renal function, thank God, but I am having it repeated tomorrow to ensure that it is still ok. The doctors are really unsure as to why my level was so high, so I’m not to continue with the IV Tobramycin and to just have it in it’s nebulised form (TOBI).
Currently I have to say I’m feeling a bit on the poorly side due to not being on any form of Tobramycin for nearly 5 days (and an incredibly hectic weekend)... But since being allowed to nebulise it again, I’m beginning to pick up again.

All of this aside, I had a really lovely weekend... It was the long awaited and highly anticipated hen do of a certain Miss Beth Avis!! We had a lovely meal at ‘The Shapla’ restaurant in Alresford and then we spent the next day completely relaxing at Forest Mere Health Spa. The only thing to mar this lovely weekend was my STUPID portable oxygen unit.  As I have discussed in previous blogs, I have a Dewar of liquid oxygen which I use to replenish a small portable unit which I can take around with me. On ‘demand’ setting (which releases O2 when I breathe in) using 3 litres a minute will last approximately 9 hours. Filling the portable unit is pretty simple – you push the portable unit onto the top of the Dewar and under pressure the liquid O2 shoots into it and fills it. Once filled, you leave it to temper and then 20 minutes or so later you are good to go... Or so one hopes!!! Occasionally it misbehaves and I am not quite sure why it does this, but from time to time once it is filled, the portable unit will not dispense oxygen ‘on demand’ (or at all sometimes) meaning that my 3 litres per minute usage will only last about 3 hours.. Scuppering any hopes of leaving the house for more than that time! On Saturday, the night of Beth’s hen meal of course it decided to play up, but it wasn’t too much of a problem as I knew I wouldn’t be out for all that long... However, it really threw the spanner in the works for me when it decided to misbehave on the morning of the spa day... Firstly we filled it and then left it to temper, then after it still not working almost an hour after filling, and further time spent searching for the English language part of the maintenance manual, we were instructed to lay it on its back to temper. We followed these instructions, and suddenly about 5 minutes later there was a loud cracking noise from the kitchen... The liquid O2 had completely leaked from the unit! As liquid O2 is incredibly cold (it’s boiling point is approx -183°C) it had cracked part of the paintwork on the windowsill!! Thank goodness it was only superficial damage, and can be fixed with a bit of paint! So the unit was now empty! After a second attempt at filling, the unit was dispensing O2 at a slow rate, we decided just to go. There was no way on earth I was going to let CF ruin Beth’s spa day, besides this, I was really looking forwards to it! Nevertheless, after much frustration and anguish, it started to pathetically dispense oxygen! Luke (my real life Superman) very kindly drove me to the health spa where I met up with the lovely hens and had an amazingly relaxing day! I was a bit deoxygenated as I’m meant to have a higher flow rate when I move around, but on the whole it was absolutely fine!

I’m a little bit anxious about my blood test tomorrow; I’m really praying that the kidney damage hasn’t occurred after the last test. Despite this I am firstly really thankful to have such an accommodating GP surgery, as there is usually such a long wait for a blood test... Secondly that I have such a great carer in mum; she is willing (and sometimes able) to drop everything to drive me here there and everywhere when Luke can’t. Lastly, but by no means least, I have such a wonderful group of friends who take me as I am and wheel me here there and everywhere! I used to be so self-conscious about wearing my oxygen in public but now I really don't care about it... People will either accept me for who I am, or they won't! So whilst my life is difficult and trying, it could be so much worse, and I am so grateful that it isn’t!
Posted by Sammie at 21:32